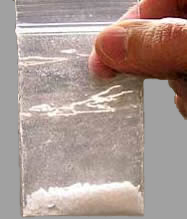 Meth abuse leads to many damaging effects, including addiction. Addiction is characterized by compulsive drug-seeking and drug use which is accompanied by functional and molecular changes in the brain. This drug can be smoked, snorted, injected, or taken orally, and its appearance varies depending on how it is used. Typically, it is a white, odorless, bitter-tasting powder that easily dissolves in water. Because much of the meth in the U.S. is homemade, its color and appearance can vary according to the skill of the chemist and the raw materials used.

In addition to becoming addicted to meth, chronic meth abusers exhibit symptoms that can include violent behavior, anxiety, confusion, and insomnia. They also can display a number of psychotic features, including paranoia, auditory hallucinations, mood disturbances, and delusions (for example, the sensation of insects creeping on the skin, called "formication"). This extreme paranoia can result in homicidal as well as suicidal thoughts.

With chronic meth abuse, tolerance for this dangerous drug can develop. In an effort to intensify the desired effects, users may take higher doses of the drug, take it more frequently, or change their method of drug intake. In some cases, abusers forego food and sleep while indulging in a form of bingeing known as a "run," injecting as much as a gram of the drug every 2 to 3 hours over several days until the user runs out of the drug or is too disorganized to continue. Chronic meth abuse can lead to psychotic behavior, characterized by intense paranoia, visual and auditory hallucinations, and out-of-control rages that can be coupled with extremely violent behavior.

Meth abuse is particularly dangerous because of the intense cravings it induces in users, but also for the danger it can cause to bystanders. While a person is high on meth, he feels great, energized, but the initial rush is followed by high agitation, which in many people can lead to violent behavior. Sudden manic swings in mood are one sign of meth abuse. This fixation on getting more of the drug results in the addict stealing from family members, robbing friends, neglecting their job, abusing their spouse, and even wandering off for days or weeks at a time on a 'binge'. The result of this unexplainable behavior is the addict abandons their friends and family, leading to emotional pain for everyone.

Meth abuse in the United States is one of the fastest-growing of all substance abuse problems. Fed by the manufacturer and smuggling of meth from Mexico, it began on the West Coast and is spreading inexorably eastward. Meth is a stimulant, so highly addictive that some users get hooked on the first use. Meth abuse is one of the hardest of all addictions to treat, and has a devastating and often permanent effect not only on the user's body, but on relationships, careers, and emotions. Meth abuse requires a full body detox program plus life counseling and a careful after treatment program for the addict to even have a chance at rehabilitation and a normal life.