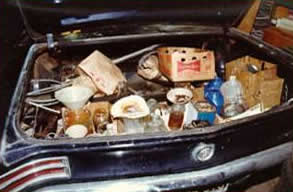 Traveling meth labs are a new method of manufacturing methamphetamine. They are designed to get around laws restricting the sale of the ingredients needed to make meth. This new type of meth manufacturing process is spreading across the country. Law enforcement officials claim the new "shake and bake" process is even more dangerous than the old makeshift meth labs. One wrong move and the concoction can explode into a large fireball, authorities say.

Also known as the "one pot" method, shake and bake meth is produced in a two-liter soda bottle. A few cold pills are mixed with common, but noxious, household chemicals. This in turn produces enough meth for the user to get a few hits.

Traveling meth labs and this new method of manufacturing the drug requires little physical room. All of the necessary items can be carried in a backpack, making the process mobile. Drug users are making meth while driving around in their cars and throwing the used plastic bottles, containing a poisonous brown and white sludge, along the highway.

But, traveling meth labs and the shake and bake method are extremely dangerous. If the bottle is shaken the wrong way, or if any oxygen gets inside of it, or if the cap is loosened too quickly, the bottle can exploded into a giant fireball.

If the old clandestine meth labs caught fire, the cookers would just run away. But with traveling meth labs and this new meth production method, they are actually holding the bottle when it explodes. Police in Georgia, Alabama, Oklahoma and other states have linked dozens of flash fires, some of them fatal, to traveling meth labs.

After years of declining numbers of meth labs being busted by law enforcement, due to the laws restricting the sale of pseudoephedrine, seizures are suddenly increasing again.

"I would say about 85% of our labs so far this year have been the one pot or shake and bake method," said Lt. Tony Saucedo of the Michigan State Police.

Saucedo said traveling meth labs and the new shake and bake manufacturing technique puts everyone in danger, because they can explode while the drug users are driving around, putting other drivers in danger. The old labs were usually concealed in secluded or rural areas because of the odors, but the new "labs" can be anywhere.

"It simplified the process so much that everybody's making their own dope," Kevin Williams, sheriff of Marion County, Alabama, told reporters. "It can be your next-door neighbor doing it. It can be one of your family members living downstairs in the basement."

Authorities suggest that people who find discarded bottles containing an unknown mixture leave them alone, do not open them or pick them up. Call the police and let them investigate to see if it's a danger.