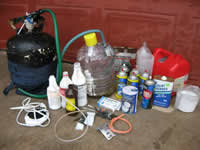 Meth abuse facts note that the makeshift equipment of an average clandestine lab would fit in a small cardboard box or cooler. Meth labs have been set up in kitchens, bath tubs, sheds, back yards, ice houses and vehicles. It is vital that retail sales personnel learn to recognize individuals purchasing large quantities or shoplifting products which can be used to cook meth. Meth abuse facts show that these products include: