Meth lab photos depict clandestine drug labs that are a collection of materials and ingredients used to make meth. These photos illustrate that this insidious drug is made mostly from common household ingredients. These ingredients are mixed and cooked together to make meth and the harmful chemical mixtures can remain on household surfaces for months or years later. There may be health effects in people exposed to chemicals to make meth before, during and after the meth-making process. Therefore, each meth lab is a potential hazardous waste site, requiring evaluation, and possibly cleanup, by hazardous waste professionals.

Meth lab photos reveal that labs have been discovered in hotel and motel rooms, restaurants, barns, private homes and apartments, storage facilities, fields, vacant buildings and (moving or stationary) vehicles. A minimum of 5 to 7 pounds of chemical waste are produced for each pound of meth manufactured.

Chemicals may enter the body by being breathed, eaten, or absorbed through the skin. An acute exposure is one that occurs over a relatively short period of time. Health effects caused by exposure to meth lab chemicals depend on:

As these meth lab photos show, the most common chemicals used to start the meth making process are over-the-counter cold and asthma medications. Typical brands include Sudafed, Revive, and Mini-thins, which contain ephedrine or pseudoephedrine as decongestants or stimulants. Meth lab photos notes that common meth lab supplies include: 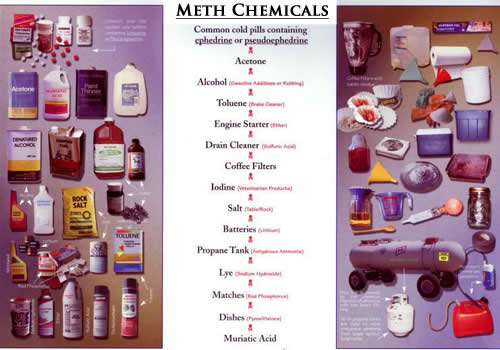 Meth lab photos also depict how sad the lives of those affected by meth labs are. Children of meth labs are at risk for serious injuries. Chemicals used in a meth lab may explode when mixed improperly. For example, authorities responded to a fire and explosion of a meth lab. Inside was an 11-month-old baby that was rushed to the hospital in critical condition. The infant passed away after several months. The infant's parents, who were fugitives, were captured later while attempting to buy chemicals used in making meth.

A meth lab was found in the bedroom of a 1-year-old child. According to officers, the child was in a walker at the time of the raid. The parents were charged with child desertion and many more charges. The officers took the child into custody.

Meth lab photos also notes that narcotics officers found a meth lab while conducting a probation search on a home. Inside, they also found a 4-year-old girl playing outside by meth lab waste. Officers found that her mother had been making meth in a travel trailer on the property. The 4-year-old drew pictures and talked about a smoking pipe made of glass and of domestic violence she had witnessed in the home. The mother was arrested for manufacturing meth and child endangerment as well as a few other charges. The child was taken to the hospital and tested positive for meth and other drugs. The child was placed in a foster home.