Signs Of A Meth Lab 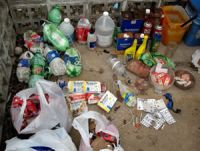 Signs of a meth lab often include common household chemicals and products, including the now restricted ephedrine and pseudoephedrine containing medications. These ingredients are mixed and "cooked" to make this dangerous drug. The cooking process can also create potentially harmful chemical residues that can remain on household surfaces for months or years after "cooking" is over. There may be adverse health effects in people exposed to lab chemicals before, during and after the production process. This is why meth labs are considered hazardous and should only be handled by hazardous waste professionals.

Meth labs can be set up nearly anywhere, but are most commonly found in motel rooms, apartments, and rental properties. Other locations may include storage units, RVs, sheds, garages, vacant buildings, and campgrounds. The signs of a meth lab start the moment you enter the property. Take a deep breath. A cat urine smell is often associated with meth. Other odors to be aware of are ammonia, vanilla, solvents or metallic smells. These are warning signs of a meth lab.

Additional signs of a meth lab are strange items that have been taken apart and not reassembled correctly or at all. This is because meth users sometimes become obsessive about objects. They may dismantle things like remote controls, watches or electronic devices. The objects can sometimes be found in a pile dismantled down to the smallest part.

What are some other signs of a meth lab?

Large amounts of household products are a tip off. Common products are used to manufacture meth that can be found in an average home, except in a meth lab large quantities of common items may be in odd places. If you see multiple packages of lye, Heet, Coleman fuel, peroxide, pseudo-ephedrine or coffee filters in odd places, like stored in a bathroom, closet or kitchen, this is an indication that it may be wise to avoid this property and if you feel appropriate, notify your local law enforcement. Below are additional signs of a meth lab as well as some of the most common types of labs used to create this dangerous drug.