What is crystal meth? 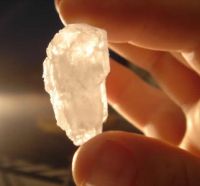 Crystal meth is a powerful stimulant, altering the user's moods in different ways as the effects of using it gradually diminish. Immediately after ingesting any form of crystal meth, the user experiences an intense, rush or feeling of extreme pleasure. Crystal meth initially generates powerful euphoric feelings often lasting 8 hours or more. This drug is smoked, snorted, taken orally or injected intravenously. Abuse of crystal meth is most often done by smoking the drug.

Crystal meth is a well known street drug and the abuse of crystal meth is considered the fastest growing and most serious drug problem facing America today. One of the reasons crystal meth has become so popular, is it can be produced by combining a specific set of chemicals, all of which can be obtained legally. Another reason is its mood altering effects have a tendency to last a long period of time. The term crystal meth refers to its crystalline appearance and the word meth is short for methamphetamine.

Abuse of crystal meth is extremely hazardous because this drug is highly addictive. Crystal meth causes severe, often irreversible, physical and psychological damage. Manufacturing crystal meth is dangerous because the process is toxic and potentially explosive. Some crystal meth users create, or "cook", batches of the drug right in their home, basement or garage. The bulk of production is done by drug-trafficking cartels in the United States, as well as Mexico and Canada.