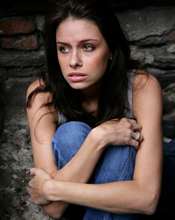 Meth abuse symptoms, if taken in large doses include irritability, aggressive behavior, anxiety, excitement, auditory hallucinations, and paranoia along with delusions and psychosis. Meth abusers tend to be violent. Mood changes are also common, and the abuser can rapidly change from friendly to hostile. The paranoia produced by meth abuse results in suspiciousness, hyperactive behavior, and dramatic mood swings.

Meth appeals to drug abusers because it increases the body's metabolism and produces euphoria, increases alertness, and gives the abuser a sense of increased energy. High doses or chronic use of meth, however, increases nervousness, irritability, and paranoia. The extreme paranoia that meth abusers can experience is often associated with a distorted tendency toward violence. Adverse meth abuse symptoms include the risk of stroke, heart failure, and prolonged psychosis.

Some of the effects that meth use has on the mind are also meth abuse symptoms. These meth abuse symptoms include disturbed sleep, excessive excitation, excessive talking, panic, anxiousness, nervousness, moodiness and irritability, false sense of confidence and power, delusions of grandeur leading to aggressive behavior, uninterested in friends, sex, or food, aggressive and violent behavior, and severe depression.

Continued Meth Abuse Symptoms and Signs Include the Above Symptoms, Plus:

Advanced Meth Abuse Symptoms and Signs Include the Above Symptoms, Plus:

Meth Abuse Symptoms of an Overdose -A toxic reaction (or overdose) can occur at relatively low levels, 50 milligrams of pure meth for a non-tolerant user.  Metabolic rates vary from person to person, and the strength of the meth varies from batch to batch, so there is no way of stating a "safe" level of use. Because stimulants affect the body's cardiovascular and temperature-regulating systems, physical exertion increases the hazards of meth use.