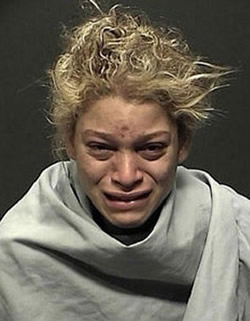 Users of large amounts of meth over a long period of time can develop an amphetamine psychosis, which is a mental disorder similar to paranoid schizophrenia. The symptoms of this psychosis are hallucinations, delusions, and extreme paranoia. Additional meth abuse side effects have drastic physical effects on the human body, including extreme weight loss, which unfortunately makes meth use attractive to women, rotted teeth ("meth mouth"Â'), anxiety, insomnia, and confusion as well as paranoia and delusions such as the feeling of insects crawling under the skin. This in turn leads to skin lesions from addicts picking or itching.

As a powerful stimulant, meth abuse side effects, even in small doses, can increase wakefulness and physical activity and decrease appetite. A brief, intense sensation, or rush, is reported by those who smoke or inject meth. Oral ingestion or snorting produces a long-lasting high instead of a rush, which reportedly can continue for as long as half a day. Both the rush and the high are believed to result from the release of very high levels of the neurotransmitter dopamine into areas of the brain that regulate feelings of pleasure.

Meth abuse side effects are extremely toxic. In animals, a single high dose of the drug has been shown to damage nerve terminals in the dopamine-containing regions of the brain. The large release of dopamine produced by meth is thought to contribute to the drug's toxic effects on nerve terminals in the brain. High doses can elevate body temperature to dangerous, sometimes lethal, levels, as well as cause convulsions.

In scientific studies examining the consequences of long-term meth abuse side effects in animals, concern has arisen over its toxic effects on the brain. Researchers have reported that as much as 50 percent of the dopamine-producing cells in the brain can be damaged after prolonged exposure to relatively low levels of methamphetamine. Researchers also have found that serotonin-containing nerve cells may be damaged even more extensively. Whether this toxicity is related to the psychosis seen in some long-term methamphetamine abusers is still an open question.

Although there are no physical manifestations of a withdrawal syndrome when meth use is stopped, there are several meth abuse side effects that occur when a chronic user stops taking the drug. These include depression, anxiety, fatigue, paranoia, aggression, and an intense craving for the drug.